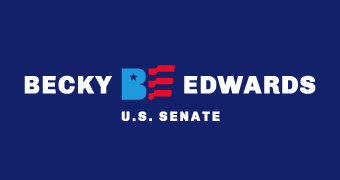 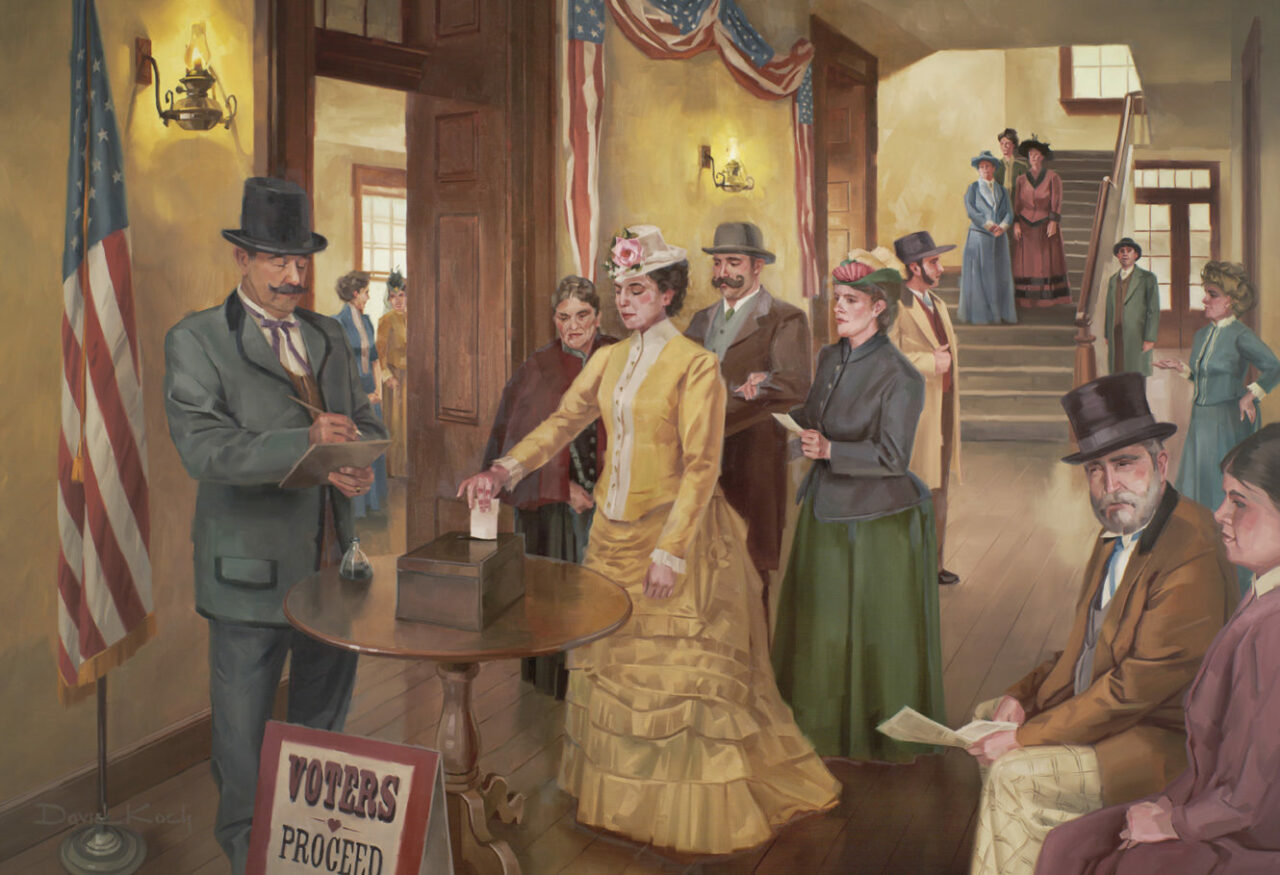 Originally published by The Deseret News

When Seraph Young cast a ballot in a municipal election on Feb. 14, 1870, in Salt Lake City, she instantly made history. Never before had a woman voted in the United States under a law that afforded her the same suffrage rights as a man. And while the Wyoming Territory passed a suffrage law the previous December, Utah women — by way of a measure signed just two days prior to the Feb. 14 city election — were the first in the nation to cast ballots. Six months later, on Aug. 1, thousands of Utah women voted in the general election for the first time.

Both were landmark achievements. A year before Young’s vote, George Q. Cannon, then an apostle in The Church of Jesus Christ of Latter-day Saints and editor of the Deseret News, made the case for Utah’s progressive approach.

“The plan of giving our ladies the right of suffrage is, in our opinion, a most excellent one,” Cannon editorialized in the Deseret News in 1869. “Utah is giving examples to the world on many points, and if the wish is to try the experiment of giving females the right to vote in the Republic, we know of no place where the experiment can be so safely tried as in this Territory.”

A century-and-a-half later, as Utah honors its historic legacy, we simultaneously trail the rest of the nation in other respects — in gender wage gaps and in women in state leadership. Nationwide, more women are serving in state legislatures than ever; in Utah, just 24% of state legislators are female, six percentage points lower than the national average.

But Dr. Susan R. Madsen, the founding director of the Utah Women & Leadership Project at Utah State University, thinks we are on the verge of change.

“I really think that’s going to kick up soon,” she said, pointing to a number of programs geared toward supporting Utah women who run for or are elected to political office. “There’s a lot of energy, but there are still a lot of blocks.”

Blocks, Madsen notes, like social perceptions that equate leadership to masculinity, or a lack of networking or structural support that men in politics enjoy, or a shortage of female political role models. Utah has never elected a female governor. (Olene Walker served two years in that position, but she took office after then-Gov. Mike Leavitt resigned). Only four members of its congressional delegation have been women, the last being Mia Love, who represented Utah’s 4th District from 2015-2019. Utah has never elected a female U.S. senator.

At least two women are hoping to change that. Becky Edwards, a former Utah state representative, announced her candidacy in May to challenge Sen. Mike Lee, who is up for reelection in 2022. On Thursday, Ally Isom — a longtime communications strategist and former deputy chief of staff for Utah Gov. Gary Herbert — also announced her candidacy.

It’s time, says Katherine Kitterman, a historian of early Utah women’s history. “I think the women back in 1870 would’ve been surprised it took us this long,” she said.

‘It was that awful’

A January study from the Utah Women & Leadership Project analyzed the challenges and benefits Utah women face in politics. The 118 participants included leaders from many levels of government, from school boards to the state legislature.

The top challenge respondents claimed to face was gender bias — navigating what they called “the old boys club,” feeling “mansplained” and talked down to, being victims of inappropriate comments or actions by male colleagues.

“I absolutely was treated differently as a woman, and that was incredibly frustrating,” one respondent explained. “As much as I enjoy policymaking, I don’t know that I’ll ever want to do elected office again. It was that awful.”

For women in leadership, there is a partisan divide, too. Two-thirds of women nationwide elected to their state legislatures are Democrats, and though just 22% of the Utah State Legislature is Democratic, the majority of women — 16 out of 25, or 64% — are.

Respondents in the leadership project study explained that these figures are not coincidental. There are not women’s organizations or structures within the GOP to support women like in the Democratic Party, one said, and the resources and encouragement given to progressive female candidates are often unmatched for conservatives.

This is not a new issue in Utah, Madsen said. “I won’t give you names, but a couple of women through the years, especially in past years, have switched parties, even though they feel like they’re a Republican, just to get elected,” she told me.

The new Republican Women Lead PAC, introduced in early June, attempts to temper these concerns. All nine GOP women in the Utah State Legislature are the group’s inaugural members, and its mission is “to recruit, train, mentor and provide financial resources for Republican women running for all levels of elected office,” the founders wrote in a Deseret News opinion piece.

Rep. Candace Pierucci explained that the goal is not to meet a quota or replace specific incumbents — instead, they want to create a pathway for more women to run for and be elected to public office throughout the state. The PAC’s mission mirrors organizations on the Democratic side, like the Women’s Democratic Club of Utah and the Utah Democratic Women’s Caucus.

“It is just concerning that in a conservative state, we don’t have conservative women stepping forward to lead,” Pierucci told Utah Political Underground.

Support and encouragement from party leaders goes far in increasing the number of women who run for public office, a study performed by BYU political scientists shows. While much existing research suggests that low numbers of female politicians stems either from a smaller supply of potential female candidates or voter demand for female officeholders, the BYU study suggests that addressing both — supply and demand — leads to an increase overall. In short, women need to see that they are capable and have the resources to run — and voters need to see why we need them.

A woman in Washington

For Edwards and Isom, running for the U.S. Senate has little to do with their gender and everything to do with the leadership they believe they can provide. “I’m not running just because I’m a woman,” Isom said, and Edwards concurred: “I really think that the race, at the end of the day, is about qualifications,” not gender.

But for Utah, having two female candidates in contention for the state’s highest national elected position is a victory, Madsen argues. “It’s a major step forward. And we’ve had some other women in the running for Senate (in past years,) but I think these are the two strongest that have ever been out there, in my opinion.” Madsen noted that she has heard from another potential female candidate who has yet to announce.

It will be an uphill battle for both Edwards and Isom, though, who intend to challenge incumbent Lee in the Republican primary. According to a January poll by the Deseret News/Hinckley Institute of Politics, Lee had a 45% approval rating among Utah voters and a 41% disapproval rate. June polling among potential GOP primary voters picked Lee at 47%. Edwards, a month into her campaign, garnered 11%; Isom had not announced her candidacy at the time of the poll and was not included.

While Edwards and Isom differ on policy, both are centering their campaigns on listening to Utah voters. Edwards is launching what she calls the “Yellow Couch Tour” — she said she is packing a yellow couch from her living room in the back of her Volkswagen Atlas and driving it to events throughout Utah. During her time in the state Legislature, she invited her constituents into her living room each Saturday during the session to discuss the issues most important to them; this tour, she says, offers an opportunity to recreate those conversations, even in Utah communities far from her Davis County home.

“It’s been a really great metaphor for the kind of problem-solving and working together that I focused on during my previous service,” she said.

Isom, too, said she is launching a statewide campaign, called the “Walk a Mile Tour” — where, as the name suggests, she’ll walk a mile or so with community members and listen to what matters to them. “I think it’s a really important effort to get to the heart and soul of Utah,” she said. “I need to walk with people, hear them, see them, listen to them, be in their community and really understand what’s on their minds.”

While both candidates consider themselves to be lifelong conservatives, their relationship with the Republican Party has been tenuous at times. Isom disaffiliated with the GOP in 2016 after Donald Trump was elected president, though she has since returned. She says she’s always been “a diehard, classic, conservative Republican” and believes the party “is at a crossroads and ready to return to conservative principles.”

Lee has already attempted to capitalize on his competition in fundraising efforts. Several mass emails from Lee’s campaign team to supporters claim that Lee is “the ONLY conservative in this race who has and will fight for our America First priorities,” and note Lee has “no less than NINE GOP Primary opponents,” perhaps drawing from a March column in the Deseret News that mentioned nine potential challengers (including Edwards and Isom, who had yet to announce their candidacies).

Isom and Edwards aren’t concerned. “We’re focused on our campaign and our issues,” Edwards said. “It’s actually a distraction from Utah families and their real concerns.”

But in the state that first offered women the right to vote, it’s past time for women to be in contention to represent Utah in the U.S. Senate, Isom says.

“150 years is a very long time to not have female representation (in the Senate) on behalf of the state that had women voting first,” Isom said. “There’s an irony there that needs to be addressed.”

A century-and-a-half after the first Utah woman cast a vote, several glass ceilings remain to be shattered. The number of women in elected office trails men and lags far behind the national average. Several elected offices — both at the state and national level — have never been held by women. There has never been more than one female member of Utah’s Congressional delegation at a time (though four of the six chiefs of staff for Utah’s four U.S House members and two U.S. senators are women).

What will it take for this to change? Solutions are both systemic and interpersonal. Organizations and structures, like the new Republican Women Lead PAC or the host of other groups geared toward preparing and supporting women for public office, play an essential role.

Other solutions are more nuanced — and more personal. Fighting unconscious biases, like the false idea that men are inherently better suited for public office, is a start. Social science research suggests that boys are more socialized to see themselves as future leaders than girls; in one experiment, when asked to draw a leader, almost all participants instinctively drew a man.

It’s all up from here, Madsen says. It start with Utah’s heritage but will be sustained by the current and upcoming generations of female Utah leaders.

“We really were pioneers, because we were ahead of the conversation on voting and women’s education,” Madsen said. “But we have fallen behind in so many things.

“I do think we’re on the upswing. There’s a lot of energy right now.”